Lugger in the Morbihan, during La Semaine du Golfe


In may we went to France to participate in La Semaine du Golfe, the festival for traditional sailing boats. 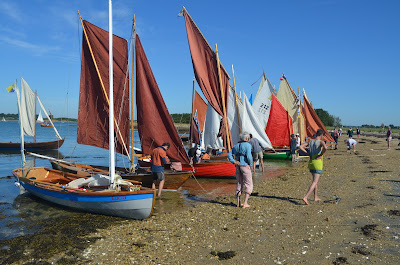 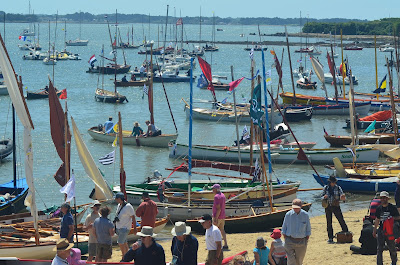 A Dutch friend explained the way it works like this:  The French spend 2 million euro's in advertising the event in France. 1,5 million French actually come to watch the spectacle and they all have to sleep, eat and drink, and that will not be fast food, but preferably local specialties. We, the sailors , are guests and made very welcome, but we have to perform. This we do by sailing the daily routes and the crowds gather at the narrow passages where the currents run strong or the anchoring places where everyone is eating and drinking for lunch or dinner.
We were in Flotille nr. 2, the oar-and -sail boats, and we quickly made friends with the others. Most of us slept ashore and we were collected each day with a shuttle bus and brought to our boats and when we'd done our duty brought back to the campsite.
The weather this year was exceptionally good and most of the time it was great fun. I met Roger Barnes, author of The dinghy cruising companion in his Ilur and several of his friends from the Dinghy Cruising Association. I saw Gerd Loehmann again whom I met in Douarnenez in 1988. He built there a Norwegian type of boat, a Sexaring I believe, and was here with his wife in a Oselver.
Also on the water we saw Francois Vivier, the designer in his new boat, but unfortunedly we didn't really meet as he was being intervieuwed by French Television, but he sent me a link to pictures he took where I found our boat twice.https://goo.gl/photos/yr9x4FjrQaqKAuVr7
The interesting thing is that when I was at the helm the transom was partly immersed and when my wife was helming the rudder was half out of the water. Ofcourse the prismatic coefficient is a bit low, but I might lose some weight perhaps.
The last day I made a mistake: We were moored in Port Anna waiting for the tide to row as small distance to the trailer slip. Just outside the harbour the tide swept us unde the bowsprit us a stout fishing boat and  to our consternation we heard a sharp breaking sound. ' What a shame, ther e goes the mizzen' I thought but the mizzen did not give way but as a giant crowbar it ripped out the transom. Suddenly we had a very modern boat, but the transom was still attached and I could bring it in after taking out the mizzen. Happily there were no waves and we were not swamped. We switched positions and carefully rowed to the slipway wher we took her out. The actual damage was surprisingly small and when I had twisted of the 4 stainless steel screws that connected transom and gunnels I could pace it back. Duct tape and some rope   held the transom in place where we hang also the licence plate. A helpfull boat builder on the campsite added some screws so we drove safely home next day. 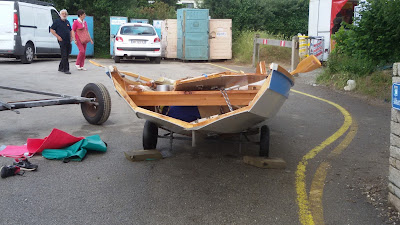 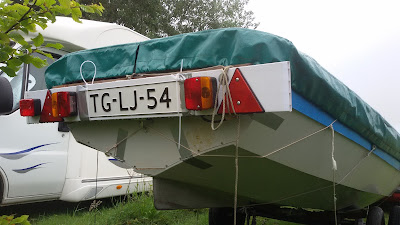 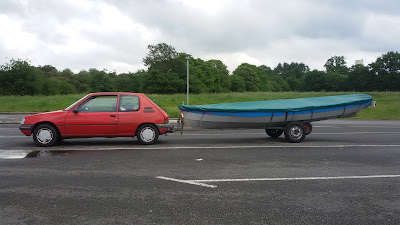 The boat is repaired by now, and as we are busily sailing a Laser and Sunfish I am taking the opportunity to build a new rudder. I am sur there is a lesson here what I am at a loss which one.