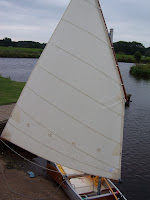 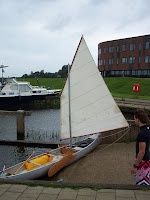 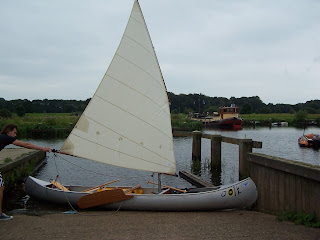 Oughtraid 2011, organized by Bert van Baar. I have been admiring Iain Oughtred’s designs for a long time, and finally made contact with Iain a few month ago. As a sailmaker with a passion for oarandsail boats I made many sails to his designs. This time no volcano spoiled the meeting and saturday evening, we met at the lake of Uitgeest. Arriving a few hours late I saw him, taking pictures of boats, studying details, and not wanting to disturb him, we launched our aluminium Caledonia Yawl with the help of other boaties. Ben Ullings, a professionel boatbuilder who is at the moment without Oughtred boat, helped me rig her. Iain came by and I invited him onboard for a sail which he graciously accepted. Bert Reyntjes, who owns De Bootbouwer, came also with us and Iain took the helm at my request. There was a good breeze and every boat was showing of nicely except a few who hadn’t got right the rigging of their boats. In gatherings of this kind somehow always boats are present whose owners use it as a tryout which is understandable because many backyardbuilders got in a rush to finish their boat. And for most of us it was the start of the season. Bert looked at the buildings of the Bootbouwschool and announced: “Now we ought to buy it and then fill it our boatbuilding companies, a sailmaker, perfect location and probably cheap.” Iain fell in with :” That’s the problem with my spot on Skye, too isolated, no boatbuilders, I could live in a place like this.” And we all dreamed of our boatbuilding, sailmaking and boatdesigning paradise, till we caught up with the other boats and Iain urged us to trim the boat so we might pass a few others.

Later that night after a nice dinner, provided by Joke, Berts wife, there was still a nice breeze and we got three boats, all lugrigged Caledonia Yawls for a short sail.

This time I had amongst others three boatbuilders wives who started singing untill one of us urged them to stop. He felt to miserable after the road acccident earlier when his beautifull Elf was destroyed on her trailer by a careless lorrydriver who overlooked his boat. After uttering the words “ Ah, well, that can happen’, he was forced out of his cabin and police came to get their statements. The whole story will be treated in more detail in Watercraft and I hope and expect the victim is recovering to build a new boat.

Later that night Iain held a lecture about the boats he had designed or was in volved with. What I remember best is his remark on a certain boat:”This boat embodies none of the elements I was brought up with, that a fast boat should be lean, light and have a short deep keel or daggerboard”. On my question how long a boat would last that was built without the best of materials, good but not the most expensive plywood, only epoxy for gluing, oil paint , and pine instead of hardwood for most of the solid wood he answered that it just depended how long she was taken care of. A sobering remark.

After some drinks most of us went to bed in our tents that we had put on the vast terrain of the Boatbuilding school.


The afternoon passed quickly with looking at boats, talking boats and raids, sipping wine till we had to get our boats on the trailers again to get home.

With thanks to Kathy Mansfield who helped me with the pictures.
Gepost door Frank van Zoest op 06:14 Geen opmerkingen: